Drug Science stands by its e-cigarette analysis from 2014, any way of radically reducing the death toll from tobacco would be a worldwide public health triumph. e-cigarettes are not the solution to end the ever-increasing death toll caused by tobacco. However, they have proven to be an incredibly effective tool for tens of thousands of UK smokers who want to quit.

It is important to explain why the reduction of smokers is so important. In England alone, each day more than 200 people die from a smoking-related disease. In contrast, vaping-related fatalities are extremely uncommon. To date, Drug Science are unaware of a single vaping-related death happening in the UK.

Smoking in the UK has seen a real reduction since the introduction of vaping devices. However, it is useful to examine whether this is caused by the accessibility of e-cigarettes or an external factor. To do so, Drug Science will examine and compare a jurisdiction with similarities to the UK but far more stringent regulation- Australia.

Researchers at UCL estimate that in 2017, 50,000-70,000 regular smokers were able to cease smoking because they had access to an electronic cigarette. This study also found that the increase in vaping uptake coincided with the rise in people who were successful in quitting smoking. As a result, the number of smokers in England and Wales is falling at a faster rate than it has in the previous eight years. This is partially a result of changing attitudes to smoking, however, a significant factor is the use of e-cigarettes as an aid for smoking cessation because when e-cigarette use plateaued in 2015, the rise in successful smoking quitters also flattened out 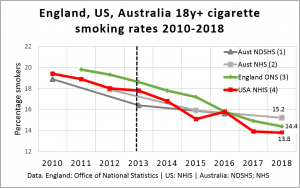 On the 1st of October 2018, 72 experts with no connections to the tobacco industry wrote a letter in support of vaping to the World Health Organisation’s, Director-General, Dr. Adhanom Ghebreyesus. In this letter, it is recommended that the WHO should embrace innovation and more actively include tobacco harm reduction in its strategy to tackle the burden of smoking-related diseases.

People who vape are predominantly current smokers not ‘never-smokers’

A common argument cited as a reason for e-cigarettes to be banned, is that they will entice non-smokers to start vaping. This fear is particularly felt in relation to teenagers and young adults.  Although this might be the case in the US, vaping impacts smoker populations considerably more than it does people who have never smoked in the UK.

Firstly, only 0.8% of people who have never smoked reported that they currently vape. More than half (52.8%) of people who vape reported using e-cigarettes as an aid to stop smoking.

Secondly, smoking amongst adults and young people is falling fast yet vaping among youth in England has not increased since 2016. The reason that we differ from the US is that the UK has been following the European Union’s Tobacco Products Directive, which puts barriers on what advertising is allowed, curbing the rate of adoption by non-smokers.

Vaping fatalities in the US

Recent months have seen serious scare stories about the rise of vaping-related lung diseases with some fatalities. Anti-smoking groups have tried to use these cases to attack e-cigarettes and call for them to be banned.   But it seems vaping cannabis, not nicotine is the culprit.

As of October 15, 2019, 1,479 confirmed and probable lung injury cases associated with the use of e-cigarette, or vaping, products were reported by 49 states (all except Alaska), the District of Columbia, and the U.S. Virgin Islands. Among 849 patients where there is information on substances used in e-cigarette, or vaping, products in the 3 months prior to symptom onset:

Independent biochemical verification of the substances inhaled appears not to have been obtained which is a significant flaw in the current analysis of these cases. However, the first thing to note here is that most of the incidents included products that contained Tetrahydrocannabinol (THC). The majority of these products containing THC were obtained off the street or from other informal sources (e.g. friends, family members, illicit dealers). The FDA believes that the THC-oil solution being vaped has a major role to play in the recent deaths.

The main toxic ingredient that has been identified in these deaths is Vitamin E Acetate, a thick oily ingredient used to dissolve the THC as it is not water-soluble. It is well known that the inhalation of oil into the lung is very toxic and can cause severe inflammation. Other toxic contaminants have also been identified and may also be contributing. Conversely, nicotine vaping liquids from reputable suppliers do not contain oils and cannot have the same effect.

So why is the US experiencing an abnormal level of vaping related fatalities?

John Newton, Director of Health Improvement of Public Health England has addressed this specific issue recently in a letter to Parliament.

“The Centre for Disease Control (CDC) has recently been clearer about the illicit products implicated in this outbreak and it looks as if most, if not all of these, were related to illicit vaping products, including vaping cannabis derivatives. Also, the suddenness of the outbreak across many USA states in just a few months, suggests that this is not a gradual effect of long-term use, but because of a specific agent coming into use in the affected population”

Over 40 million people vape nicotine globally and vaping has been widely available for about 10 years and there have been no previous cases reported of serious lung harm due to vaping. Which raises the question, what is the cause of this acute outbreak?

The results of the CDC’s investigation are yet to be published. However, the preliminary findings from this investigation firmly connects the use of illicit THC products in vaping fluids as the primary cause of death.

Since May 2017, the UK Government has kept the sale of e-cigarettes (and their tanks) tightly regulated:

Additionally, the Medicines and Healthcare products Regulatory Agency use something called the ‘Yellow Card Scheme’, encouraging vapers to report bad experiences so that they can be addressed once they have been identified.

Perceptions of vaping could cause more harm than vaping itself

Due to the negative press that vaping has received, the general public’s perception of vaping has become more negative over time. In 2012, 9% of the population believed that smoking and vaping were equally harmful, that number has risen to 22% in 2017. The media’s portrayal of the dangers of vaping is not only inaccurate but irresponsible. Vaping is not harmless. It is just less harmful. The safest thing to do is not to smoke or vape. However, the tragedy here would be if people that have quit smoking and moved to vaping revert back to smoking due to their fear of vaping. In the past few years, Australia, Brazil, and Japan have either banned vaping products or limited certain aspects of the e-cigarette marketplace. Most recently, in September 2019, India banned the sale of e-cigarettes outright and, Malaysia is considered following suit.

This is reminiscent of a Drug War-style panic and radical, ‘knee-jerk’ policy is not the answer. complete prohibition of vaping but not e-cigarettes would only extrapolate existing harms from cigarettes. Similarly, an over-regulation of products could result in users turning to the illicit market for a cheaper, wider variety of products. The UK is currently experiencing a fair balance by restricting the harms that e-cigarettes can create, whilst allowing market access to smokers that want to quit.

Please see the handout below for concise information on vaping related lung injuries.

DHSC announces that the UK will not legalise Snus

In My Professional Opinion - Vaping and Tobacco Harm Reduction

Drug Science submission to the WHO enquiry on vaping

From Ebola to Covid-19. Is all nicotine bad nicotine? An epidemiologist’s reflections

The vaping crisis - Questions and answers by Clive Bates

New analysis of alcohol and cannabis – what’s the harm?

A multi-criterion decision analysis applied to alcohol and cannabis regulation