Mephedrone is the common name for 4-methylmethcathinone. This is a synthetic derivative of cathinone, first synthesized in 1929, and largely forgotten until the early 2000s when Israeli scientists working for an insecticide company started experimenting with cathinones as octopamine analogues to disrupt the brain activity of aphids so make them less damaging to plants. Mephedrone worked to some extent, but third-party companies soon discovered its psychoactive effects and started buying up hundreds of kilos to sell as a party drug in Israel, where it became widely used. Because of mephedrone’s origin as a plant protector, it got the nickname “plant food”. As well as its media nickname “meow-meow”, mephedrone has many other street-names, including Drone and M-cat.  Although we don’t know many of the specifics about its action on the brain, it is chemically similar to amphetamine, and it works like other stimulants, promoting the release of dopamine, noradrenaline, and possibly also serotonin.

Mephedrone’s subjective effects seem to be partway between ecstasy and cocaine – users say it increases their self-confidence and makes them more talkative (like cocaine), but also report feeling a greater sense of openness, appreciation of music and desire to dance, (similar to ecstasy).

In 2010, the Misuse of Drugs Act 1971 (Amendment) Order 2010 was passed by parliament, making mephedrone and other substituted cathinones, Class B drugs. Prior to this, mephedrone was legal, it was widely available, and cheap, costing about £10 a gram or £1–2.50 a dose and so was widely used with relatively few ill effects. Still media outrage over a new legal recreational drug rapidly developed and within two years it was banned, without any reported deaths and despite virtually no knowledge of its pharmacology and toxicology.

Many might say “so what, surely banning a drug couldn’t do any harm?”. But it soon transpired that banning it was associated with an increase in harms from other stimulant drugs.  Because mephedrone was legal it took a lot of the cocaine and amfetamine markets. This led to a remarkable fall in deaths from these two more toxic stimulants – see below. Overall, the emergence of mephedrone was associated with a reduction in over 300 deaths from these other two stimulants. Since this was not a controlled trial it is not possible to be certain that the rise of mephedrone use led directly to the fall in deaths from other stimulants but it seems almost certainly to have been a significant factor. In hindsight, one could speculate that mephedrone turned out to be the most effective intervention to reduce cocaine deaths ever known. Further evidence for a causative effect of mephedrone is the fact that since it was banned cocaine deaths have risen to their highest ever levels. 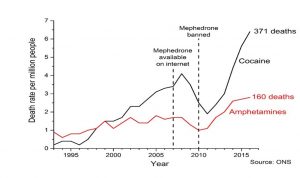 One other perverse consequence of the ACMD recommendation to ban mephedrone was that they also recommended banning many other cathinones, to avoid a cat and mouse game with the underground chemists. Most of the molecules caught in this generic ban had never been made but unfortunately one had for their proposed ban included a medicine – the antidepressant and anti-smoking drug bupropion – which had to be hurriedly granted a special exemption from the regulations. Now all cathinones but bupropion are illegal it is almost certain that there will be no further medicinal variants of bupropion made as the costs of complying with the illegal status would make them unprofitable. So the mephedrone ban has also blocked off a whole range of possible new antidepressant and anti-smoking medicines.

In My Professional Opinion - Vaping and Tobacco Harm Reduction

Drug Science submission to the WHO enquiry on vaping

An unholy triangle? Evidence, politics and uncertainty in drug policy

How has COVID-19 affected drug use?