A study published in the journal of Drug Science Policy and Law describes tumultuous changes to the UK MDMA drug market following Brexit and COVID-19 lockdowns. In this first academic publication from The Loop’s ‘back of house’ testing service, nearly half of substances sold as MDMA were instead found to contain other drugs, particularly synthetic cathinones and caffeine, suggesting that these were the substitutes of choice at a time of acute shortage within the MDMA market.

Who conducted the study?

The study was conducted by staff from The Loop, a UK non-profit harm reduction organisation that combines drug testing by chemists in a pop-up lab with consultations from health professionals, in community and event-based locations including music festivals. 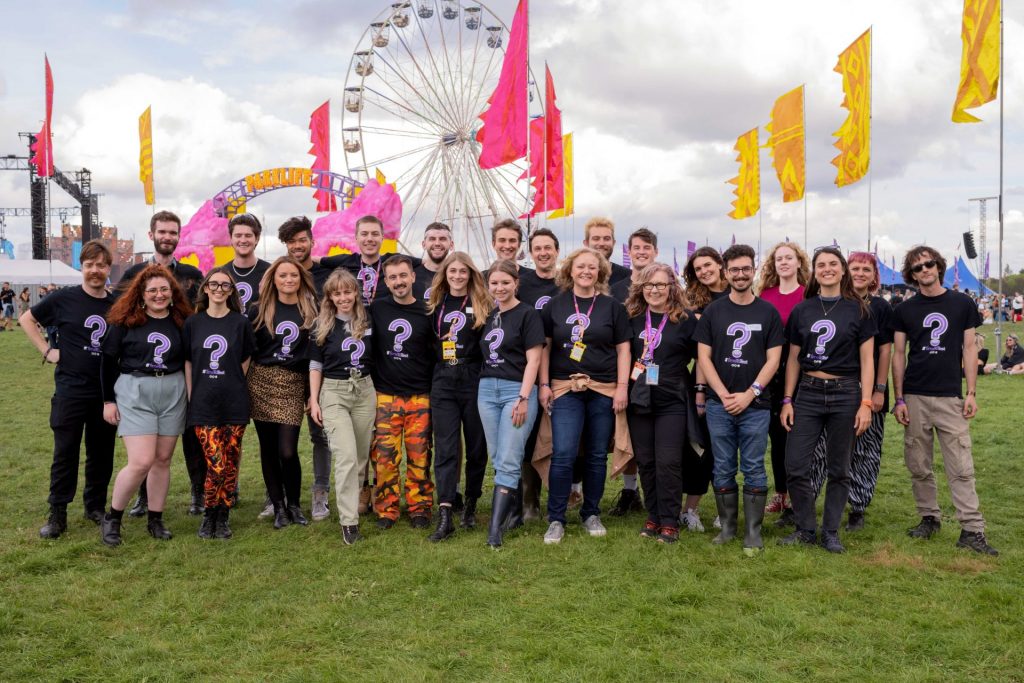 How was the study conducted?

The Loop attended three of the same summer music festivals in the summers of 2019 and 2021, before and after Brexit and COVID-19 lockdowns. Using infrared spectroscopy and several other techniques, research chemists analysed over 2,000 substances of concern surrendered to amnesty bins and obtained by onsite support services. The chemistry team compared the identity of substances known or reasoned to be purchased as MDMA, in tablet and crystal form, between the two years. At the same festivals and in parallel, social scientists surveyed over 1,000 attendees from the general festival population about their demographics, alcohol and other drug use and the policing of drugs at festivals, as part of the annual English Festival Study (EFS). EFS surveys – conducted annually since 2010 – are anonymous, conducted in person with a sample of festival attendees across festival sites across all show days, and take just a few minutes of respondents’ time.[1]

What did we find?

The biggest surprise when comparing 2019 and 2021 samples tested by The Loop lab was the large decrease in the detection of MDMA. At the same time, there was a huge uptick in the amount of caffeine and synthetic cathinones identified. Synthetic cathinones are New Psychoactive Substances (NPS) which can be considered chemical cousins to the more traditional stimulant/entactogenic drugs such as MDMA and amphetamine.

Since the emergence of mephedrone in the UK in 2008, the synthetic cathinone class has rapidly expanded and now encompasses over 150 compounds. In 2021, The Loop found three different cathinones in wide circulation at the festival sites: 4-chloromethcathinone (4-CMC), 3-methylmethcathinone (3-MMC) and N-ethylbutylone (eutylone). Both MDMA tablets and crystals were affected by the changing trends, with nearly half of samples sold as MDMA found to contain no MDMA at all. 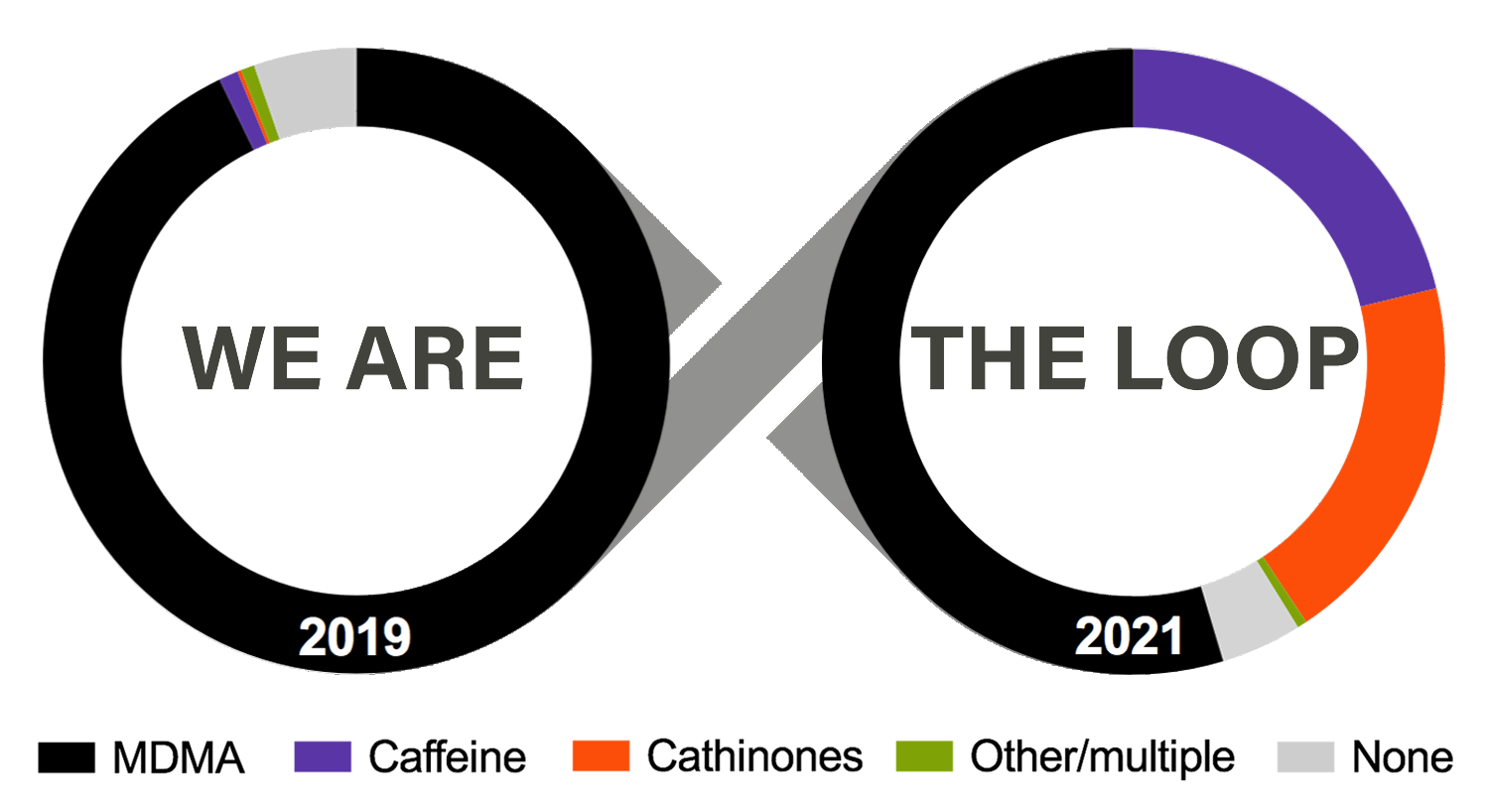 Why does it matter?

Responses to surveys of the general festival population conducted onsite and in parallel with Loop lab testing indicated that very few festival attendees intended to use cathinones, despite these drugs being in wide circulation. This indicated that the surge in cathinone prevalence was unlikely to be due to a sudden increase in popularity.

Comparisons between the Loop laboratory and survey data instead suggest that the increased prevalence of cathinones was due to them being mis-sold as other substances, with MDMA the prime suspect due to similarities in appearance and preparation. After issuing alerts to raise awareness of the counterfeits, many attendees confirmed directly to the Loop onsite harm reduction team that the substances tested were indeed purchased as MDMA.

Alerts such as the below example were shared widely on social media platforms, generating over 360,000 engagements.

"This isn’t the first time The Loop has seen cathinones being sold as ecstasy at UK events. In 2014, shortly after the banning of mephedrone, methylone made its debut on the UK drugs scene. After methylone was also banned, N-ethylpentylone emerged in 2017. In the latest festival season, three other cathinones reared their heads. Like the beast of Greek legend, cutting the head off the cathinone hydra only leads to more growing in its place."

What are the health risks?

At the time of their emergence, very little information exists about how these drugs affect individuals. However, user reports indicate that effective doses, effects and duration can be differ to MDMA. N-ethylpentylone and eutylone seemingly provide less empathogenic effects, instead providing much longer lasting stimulation. The risk to individuals seeking an MDMA-like experience is that the initial effects may be considered similar enough to low strength MDMA to lead to repeated re-dosing, resulting in hyperstimulation, anxiety, insomnia and potentially even psychosis.

Fortunately, cathinones appear to lie on the lower-end of the risk spectrum compared to other MDMA adulterants seen in the past, such as para-methoxyamphetamine (PMA). Unfortunately, we can’t exclude the possibility that more dangerous cathinone derivatives may emerge in the future, particularly as more established ones get banned. Keeping on top of emerging trends and providing early warnings to clinicians, support services and directly to drug using communities can be a useful tool to reduce the harms associated with drugs.

Why are cathinones repeatedly mis-sold as MDMA?

The authors noted that the periodic emergence of cathinones in UK drug markets seems to coincide with periods of MDMA scarcity. Most recently, this latest wave of cathinones circulating in the UK coincided with the reopening of nightlife, with global demand for MDMA having evaporated during lockdowns, evidenced in a number of surveys of changing consumption patterns including by The Loop.[2] As nightlife and festivals reopened in July 2021 in the UK, several months ahead of many other European countries, the sudden boom in demand for MDMA and other party drugs coincided with disrupted manufacturing and retail provision. These factors together created an unmet demand, exacerbated by Brexit-related supply chain issues, readily filled by cathinones. Significantly 4-CMC and 3-MMC, the two notable MDMA adulterants of summer 2021, were both still legal to buy and sell in the Netherlands during the study period, suggesting complex and inter-related markets between established street drugs and New Psychoactive Substances such as cathinones.

The aim of the Psychoactive Substances Act 2016 was to reduce the supply of New Psychoactive Substances such as cathinones. This study provides further evidence to support the view that cathinones are more likely to be mis-sold as MDMA rather than drugs of choice in their own right. This was as seen previously with mephedrone and N-ethylpentylone during other periods of disruption to MDMA markets, where demand outstripped supply. Cathinones fill the vacuum because they are similar enough to MDMA to allow the drug transaction to be completed without consumer suspicion or recourse. Decisions around which specific cathinones are used as adulterants relate not only to cost, availability and legal status within the UK but also their international legal status and therefore relative ease of trafficking from overseas. This reminds us that drug markets are international and therefore UK legislation is not the only legislative influence on UK illicit drug markets.

Given this merging of the markets between established street drugs and New Psychoactive Substances in the UK and overseas, pop-up labs at events like those operated by The Loop have distinct value. Whilst ‘front of house’ drug checking can be considered the ‘gold standard’ because of the provision of public access, this study illustrates how onsite ‘back of house’ testing services also can provide rapid analysis of substances of concern and identification of adulterants to inform onsite and offsite support services, public health monitoring networks and wider drug using communities, for the primary purpose of harm reduction. 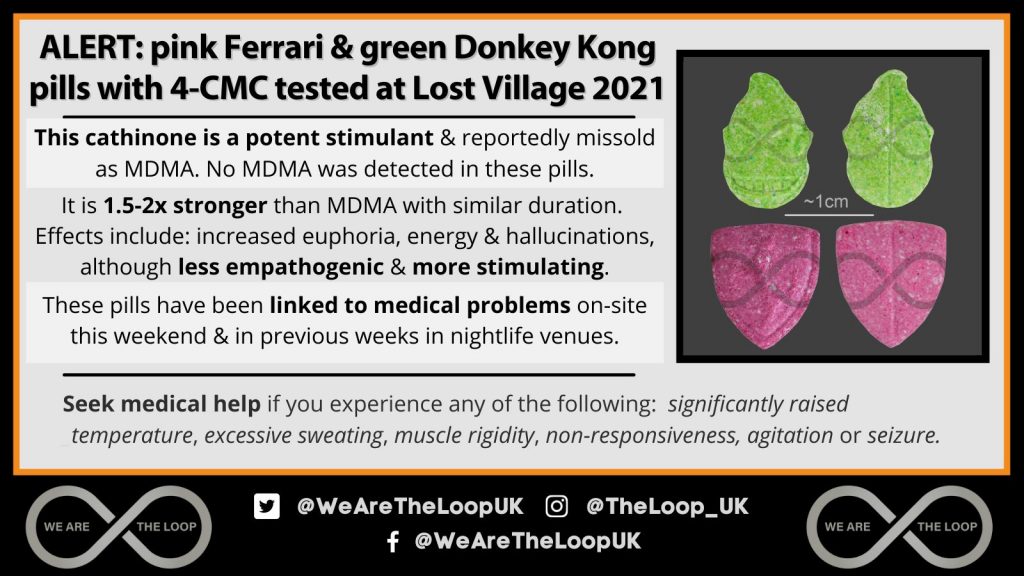 This research was published in the Drug Science, Policy and Law Journal the definitive source of evidence-based information and comment for academics, scientists, policymakers, frontline workers and the general public on drugs and related issues

For open-access to the full report of this research, see below:

Access Full Publication
[1] Previous publications from the EFS and further details of all Loop publications can be found at https://wearetheloop.org/research-activities[2] https://www.theguardian.com/society/2020/jun/29/fall-in-use-of-party-drugs-as-more-britons-turn-to-alcohol-in-lockdown

DHSC announces that the UK will not legalise Snus

The Future of Festivals