Dr Meg Spriggs is a researcher at the Centre for Psychedelic Research at Imperial College London where she works as a trial-coordinator and guide on trials of psilocybin. Her primary role is as one of the lead researchers on the Centre’s upcoming clinical trial assessing psilocybin-assisted psychotherapy as a treatment for anorexia nervosa, which is due to commence early 2021.

Anorexia nervosa has the highest mortality rate of any psychiatric disorder, due to both the physical implications of the disorder and high suicide rates. There are currently very limited pharmacological and therapeutic treatments available. All of which tend to focus on managing the symptoms rather than tackling the underlying root of the disorder.

There has been growing evidence for the role of psilocybin-assisted therapy in a number of psychiatric disorders and preliminary data by Dr Spriggs suggested that psilocybin-assisted therapy could also be relevant in the treatment of anorexia nervosa1. It is hypothesised that psilocybin could act two-fold in the treatment of anorexia nervosa; pharmacologically by targeting the serotonin imbalance in the brain associated with anorexia nervosa and therapeutically by shifting away from symptom-focused treatment and developing changes in self-worth and self-compassion.

The phrase ‘drug trial’ can be misleading and in fact, ‘therapy trial’ is more reflective of the nature of studies involving psilocybin. This is because, psilocybin is a tool used within a therapeutic framework, rather than simply a drug used to treat a disorder. A similar therapeutic framework that has been applied in other psilocybin trials consisting of screening, preparation, dosing and integration sessions will be incorporated in the anorexia nervosa trial. There are two clear aims of the trial:

To find out more about the trial, please see the video below:

Do you have lived experience of anorexia nervosa? Are you interested in helping researchers better understand participant needs?

If so, researcher Dr Meg Spriggs would like to talk to you and your primary support person about an upcoming clinical trial at the Centre for Psychedelic Research, Imperial College London. Details below: 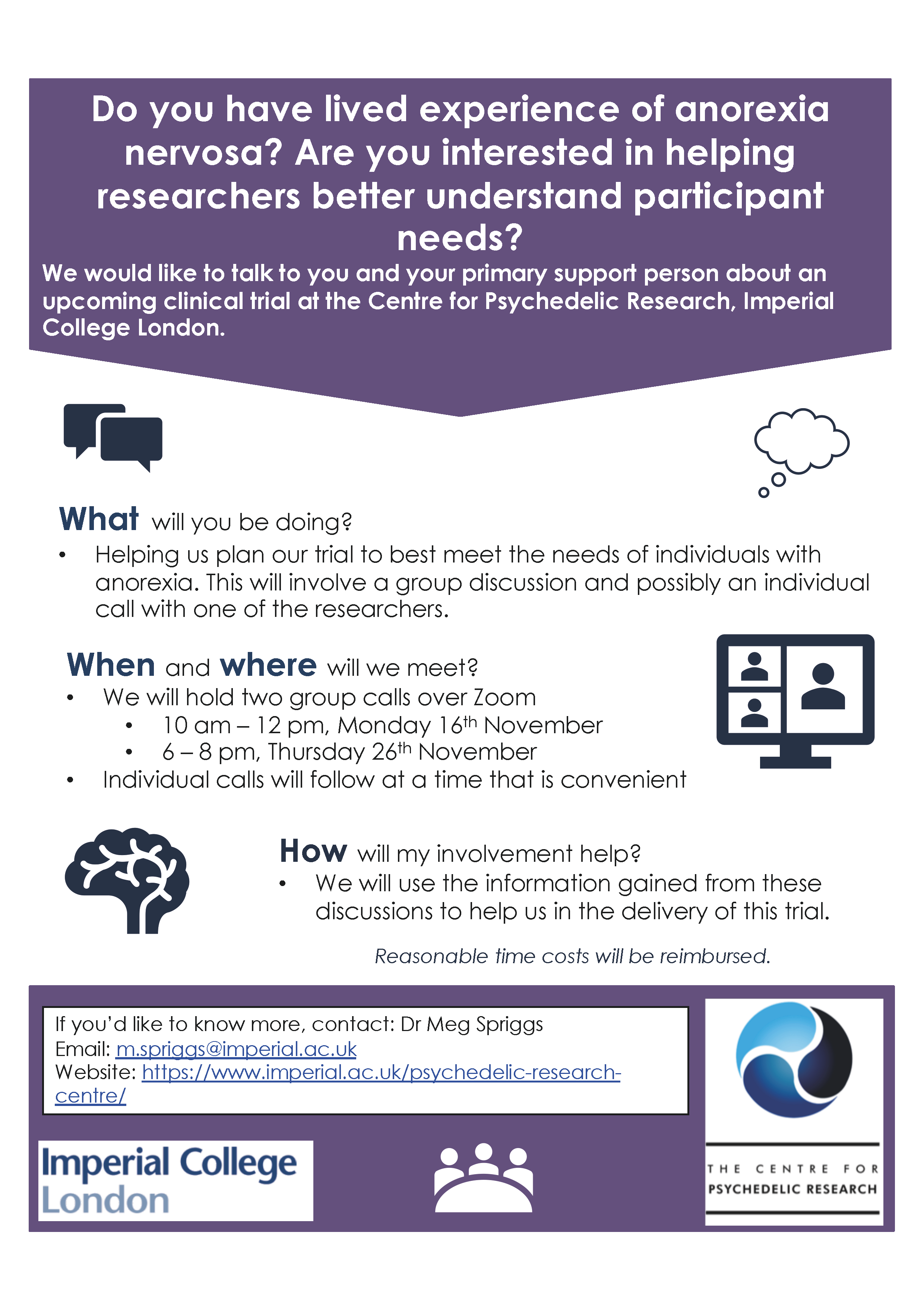 In July 2020, Drug Science launched the Medical Psychedelics Working Group (MPWG) – a consortium of experts, leading researchers and policy specialists. The overarching goal of this group is to create a rational and enlightened approach to psychedelic research and clinical treatment. To achieve this, psychedelic research education and de-stigmatisation will be critical in changing the public’s perception of psychedelic science.

On October 13th 2020, the MPWG hosted its first symposium entitled ‘Women in Psychedelic Science’, showcasing the ground-breaking and outstanding work of women in psychedelics. This was accompanied by inspiring, personal accounts of women who have used psychedelics to treat trauma.

YouGov Results - Is the UK Ready to Reschedule Psilocybin?

Psychedelics and the Brain - In My Professional Opinion

Psychedelics and Nature Connection - In My Professional Opinion

Building a Career in Drug Science

Psychological Support in Psilocybin Therapy - In My Professional Opinion

Reading, engaging with, and sharing our publications, papers and commentary gives evidence-based science and policy the audience it needs and deserves.
By using this site, you agree to the use of cookies to improve your experience. To learn more about this, including available controls, please see our Cookie Policy. OKCookie Policy